Taylor Swift and her boyfriend, Joe Alwyn, have been seen out in public before — but on his 29th birthday … they seemed to go below and beyond to hide for some reason.

Here’s the deal … paps got photos of these two goofballs Saturday walking out of London’s Bob Bob Ricard restaurant, completely covered in umbrellas. They were following each other out to a waiting SUV and a flock of photogs … and clumsily boarded the vehicle.

Fact is … we’re being told this is supposed to be Taylor and Joe — and hey, it was the guy’s 29th birthday on Friday — but you never really see them, so it’s hard to say for sure.

That said … one of T-Swift’s BFFs, Ed Sheeran, was also seen leaving the restaurant shortly afterward — so it wouldn’t be outside the realm of possibility that these two umbrella-heads were, in fact, the man and woman of the hour. Plus, frankly, this is kinda Taylor’s M.O.

She famously tries to hide from lurking paparazzi, sometimes going to extreme lengths … like when she put up an entire makeshift sheeted walkway while serving as a bridesmaid in 2017. Some of the fans that had gathered outside even booed the cloaked gesture.

Now, when it comes to Joe … Taylor’s also been pretty low-key about being spotted out with him — although, they absolutely have been seen holding hands and packing on a little PDA. 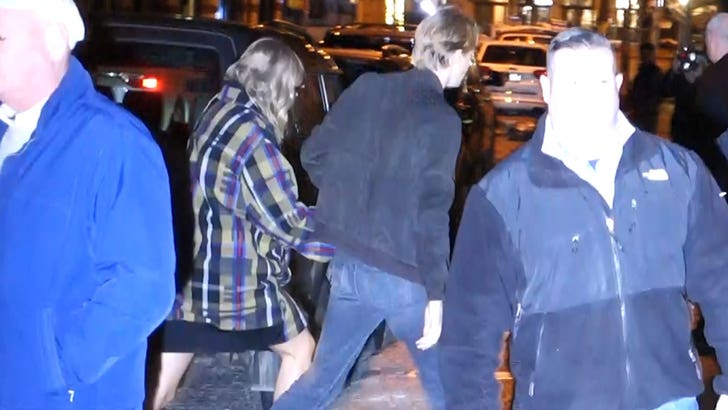 They made a run for it once while hitting up the Jingle Ball concert in NYC, not giving paps a chance to snap some decent shots. Now, they appear to have upped the ante more so.

Listen, we know what you guys look like already. Chill, TS and JA …